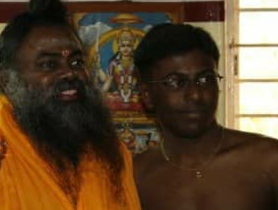 My name is Arun and I have been the Youth Coordinator of the Ashram Premananda Youth group for almost five years now. My mother is Swamiji’s younger sister and so I have known Swamiji ever since I can remember. When I was born the doctors could detect no signs of life and pronounced me dead. When this news reached Swamiji he confidently declared: “He is not dead, he will live.” My mother had not yet woken from the caesarean operation but Dr. Chandradevi, who was with her, saw Swamiji’s figure appear in the room at the same moment that I suddenly came to life and started crying.

So even at my birth there was already this close connection with Swamiji.

I lived and grew up in Sri Lanka but when I was in my last year of high school, Swamiji asked my mother to send me to the Ashram in India to finish the school year. I was glad to take the high school government exam in India as it would have been much more difficult in Sri Lanka. I’m sure that my coming to India is what made it possible for me to become a computer engineer. This increased the confidence I already had in Swamiji and I felt that he would give me whatever I wanted, when the time was right.

Whenever I go somewhere I first always pray to Swamiji to ask for his blessing so that everything will go well. Recently I went to look for a job in Chennai. I expected it would be difficult because there is a lot of competition and it had already been a few years since my graduation. Before leaving the Ashram, I went to Swamiji’s Samadhi Temple and sat in front of the Lingam for some time. I asked Swamiji: “Please give me a good job in Chennai. I don’t care about the salary but please don’t make me suffer by forcing me to go through countless job interviews. Please make it simple for me this time.”

And so I arrived in Chennai. I went to stay at the home of a college friend and immediately, that same day, I received an invitation to an interview session that was to take place the following day. The solicitation procedure began early in the morning. There were many other candidates and by evening there were only three of us left. Then I was called in separately and the person in charge asked me when I could start working. I started work the next week! I intensely feel that Swamiji helped me to get this job, as many of my college friends had spent many months looking for a job before finally finding one. When I returned to the Ashram I went straight to the temple to thank him.

There are two special memories of Swamiji I would like to share with you.  The first one happened when I was only three years old, on Saraswati puja day. It is traditional on that day to request the blessing of one’s guru before starting school. This is called Edu Thodangathal. Traditionally the guru takes the finger of the little child and, on a plate of rice grains, he will write the first letter of the Tamil alphabet (m) in the rice. And so, expecting him to do this with me, I came to Swamiji with my plate of rice. Swamiji took my finger but instead of writing on the rice he wrote while moving my finger in the air and the letter formed itself on the plate. I remember being very surprised.

Another memory I will always treasure is the time I saw Swamiji giving birth to Lingams in 2008. It was the first time after a long gap that Swamiji was in the Ashram for Mahashivaratri. I was 19 at the time and, together with some other boys in the Ashram of about the same age, went to ask Swamiji if it was actually really true that he could give birth to Lingams through his mouth. We were suddenly experiencing some doubts because our school friends were dismissive of this miracle and did not take it seriously. Swamiji told us that we could all come and sit in front of him during Mahashivaratri night so that we could witness it for ourselves. The following night I sat in front of him during the entire night and handed Swamiji the handkerchiefs to wipe the liquid kumkum from his mouth. The feeling I had is difficult for me to express, it was a truly unique experience. It was as if I were sitting next to God himself. During Mahashivartri in 2009 and 2010 I was also very near to Swamiji when he gave birth to the Lingams. In 2010 I remember that as he was walking off the stage two Lingams suddenly came out from his mouth. I had the chance to be able to receive those Lingams on a plate, and this also made me very happy.

I initially became involved with the Premananda Youth when I came to India from Sri Lanka to finish my last year of high school in 2005, which was also the time when a Premananda Youth conference took place in the Ashram. In 2009 I took an active part in the three-day conference held that year by printing invitations, making badges, and doing a lot of other work.  In December of 2012, the Ashram Youth group was reorganized and I was appointed as coordinator or president. A secretary and treasurer were also appointed. At first, it was not so easy for me to take up this responsibility and follow all of Swamiji’s advice recorded in the files. But, with determination and perseverance, I managed to overcome many of my insecurities. In my very first year as coordinator we had a big target, namely the organization of a grand international conference. It was quite a challenge for me.

But Swamiji knows your limits and if you think you can’t do something, he will prove you wrong. For example, I used to be extremely shy and scared to talk in front of people. However, in 2014 I was asked if I would give a few speeches and a presentation on stage at the international conference. I really didn’t want to do this but after an inner battle and a lot of encouragement from the people around me I finally agreed. Afterwards, it felt as if a shackle keeping me from expressing myself had broken. Later, because of this experience, I was able to give a speech in front of a big group of professors and students in my college. Another factor that boosted my confidence about public speaking was organizing the regular meetings of the Youth Group.

Being coordinator has taught me a great deal about leadership, respecting people, how to talk with people, and  general management skills such as organizing meetings and taking down the minutes, making work lists, keeping accounts, and writing activity reports. Through organizing the activities I also became much more connected to the children staying in the Ashram. Previously, although I lived in the Ashram, I had almost no contact with them. Some of them became friends and still call me from time to time. I also became more interested in abhishekams. Before, I used to pray only occasionally but after joining the Ashram Youth group my sense of spirituality grew.  I became sincerely interested in the worship of Lord Muruga. Because the Youth Group has the responsibility of performing the monthly Muruga and Ganesh abhishekams in Swamiji’s Samadhi Temple, I was automatically drawn towards this practice and began truly appreciating the benefits of performing abhishekams.

I feel that Premananda Youth is very important for young people because living in today’s world automatically spoils them. According to me, this is the reason why Swamiji created Premananada Youth, because he wants to help the future generation, and indeed future generations, through spirituality and seva (selfless service). Premananda Youth does not involve serious and deep spirituality but instead keeps the topic playful so as not to scare young people away. Through play and taking part in fun activities, Swamiji is leading them, step by step, towards a more wholesome and spiritual way of life. In general, I think it is a valuable and good experience to do seva as a member of Premananda Youth.

Doing seva should be done without the desire for any personal benefit, it should come from the heart. For example, we should not help our grandmother just so that she will give us some chocolates. Likewise, we should not pray to Swamiji only to have good results in school, but we should try to think of him always. Starting activities on time and continuing with them is very important for the Youth, as only in this way will good developments be given the chance to unfold. We should be innovative and always try to find new ways to convey Swamiji’s message to the youth. If we repeat the same things for too long a time youngsters will tend to get bored.

My earnest wish is that Premananda Youth will spread throughout the world and increase its membership significantly. In the future we should all once again meet for another international Youth conference in the Ashram. Seeing so many young people from all around the world joining together in love and happiness will also inspire the children living here, and many projects will be launched in the years to come by the Youth.